The New Year’s address of the head of state, in particular, was attended by “those thanks to whom there is Ukrainian culture,” the OP noted. 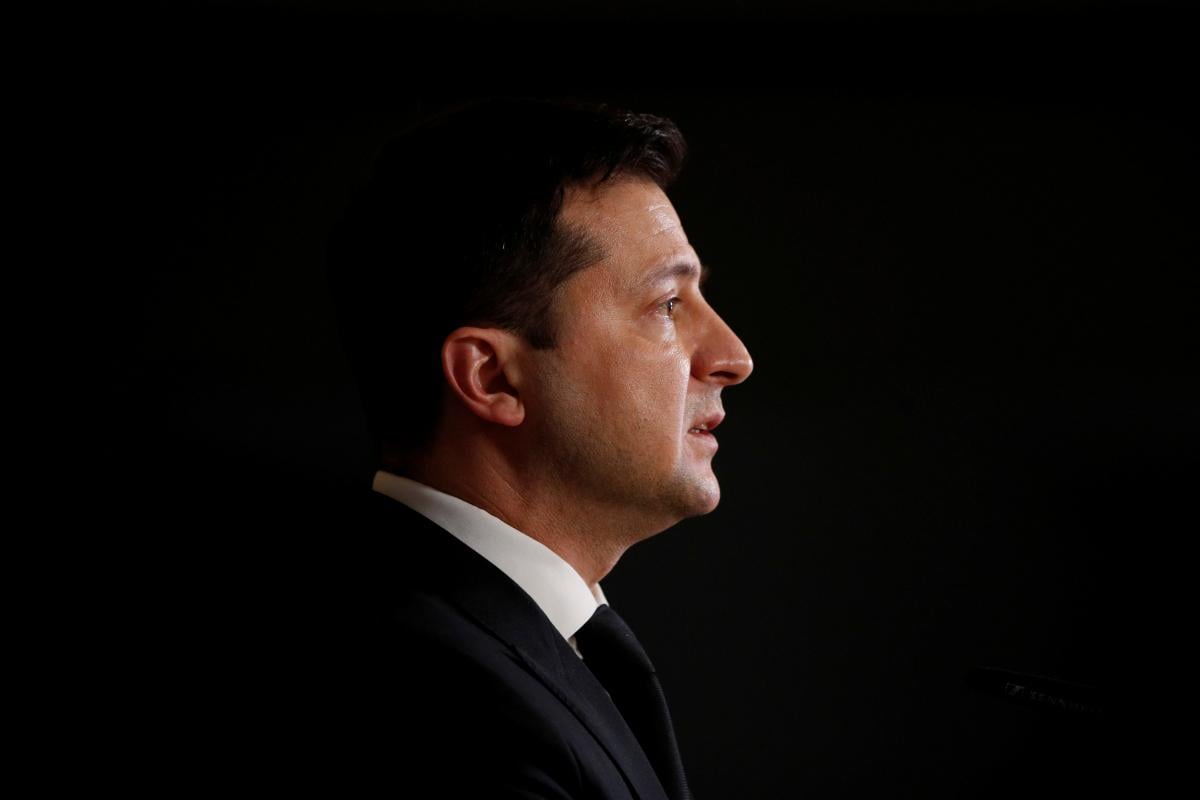 In the filming of the video of the New Year’s greetings from President Volodymyr Zelensky on the occasion of 2022, Ukrainians took part, who distinguished themselves in socially important activities, outstanding achievements and have exceptional achievements.

About it informs press service of the Office of the President.

“I will not talk about what was done, but about those who did it. And not only this year. And who has been building and creating Ukraine all the time of independence. Our people. Ordinary citizens. Although no. Our incredible people and citizens of Ukraine, “Zelensky said in his New Year’s greetings.

In particular, the head of state invited the pilots of the Airbus H145 helicopter Vitaly Tsapok and Vasily Tsilya, who carried out an urgent evacuation of an infant with congenital heart disease, to join the festive event at the Mariinsky Palace. The baby was taken from Uzhgorod in 45 minutes to the children’s cardiac surgery department of the Lviv medical institution for an urgent operation. Lviv doctors saved the child.

Sergey Troshin, pilot of the Antonov State Enterprise, pilot of the Mriya aircraft, Hero of Ukraine, also joined the President’s greeting. The aircraft under his leadership delivered coronavirus vaccines and medical supplies to dozens of countries around the world.

The following were invited to the New Year’s celebrations: a miner from Kramatorsk Yevgeny Alexandrov, “who descends underground every day to make us light and warm”, a bakery technologist from Dnipro Svetlana Kulbaka, who “works every day to make us nourishing and tasty”, bridge builder Alexander Lastovyak and Andrey Sholkov, a metallurgist from the Dnieper, are those “who melt metal, and those who build bridges from it that connect Ukraine.”

Also, physics teacher Hero of Ukraine Ilya Gelfgat, who has been teaching at Kharkiv Physics and Mathematics Lyceum No. 27 for over 30 years, also took part in Zelensky’s congratulations. He has prepared many winners of all-Ukrainian and international student Olympiads. Many of his students received academic degrees.

In addition, the following were invited: a chemistry teacher from Vorokhta, Ivano-Frankivsk region, Irina Bilinchuk, who, as the president noted, “for many years every morning has been walking kilometers to school in an ordinary Carpathian village,” and a priest from Zolochev, Mikhail Sukmanovsky, who teaches people with disabilities. … For about 10 years he has been socializing children and adults so that they feel like full-fledged members of society. The priest teaches them how to cook candles, cook cheese, and work on the farm.

Read alsoAny army on the other side of the border does not scare us – ZelenskyThe head of state also noted the achievements of Ukrainian athletes and their coaches. So, the festive event at the Mariinsky Palace was attended by: judoka Daria Bilodid and her trainer Svetlana Kuznetsova, rower-canoeist Yuri Cheban and trainer Lyudmila Cheban, gymnast Oleg Vernyaev with his trainer Gennady Sartinsky, athlete Yaroslav Maguchikh Zhanko-Roman style Beleniuk and his coach Vladimir Shatskikh are all “those who raised our flag and climbed the pedestal in the rays of glory,” and those who “have been standing in the shadows all this time.”

The President of the National Olympic Committee of Ukraine Serhiy Bubka, as well as 10-time Paralympic champion, para swimmer, Hero of Ukraine Maxim Kripak, took part in the New Year’s greetings. At the 2020 Paralympics, he received seven medals: five gold, one silver and one bronze. According to the results of the Summer Paralympic Games – 2020, Kripak became the most titled athlete.

Also present at the celebrations was Igor Yevtushenko from Kherson, who at the Brazilian Jiu-Jitsu World Championship in the UAE received “gold” in the weight category up to 69 kilograms, trains athletes and works as a janitor in a Kherson school.

Those who, as the head of state noted, had made millions of vaccinations this year, conducted unique organ transplant operations, “those thanks to which someone can live again, breathe again and love again” were also invited to take part in the greeting. In particular, this is a transplant doctor from Okhmatdet Alexander Lisitsa, a hematologist from Cherkassy Viktor Paramonov, under whose leadership the first bone marrow transplant took place in Ukraine, a doctor from Lvov, Oleg Samchuk, who made the first lung transplant, and a nurse from Odessa, ” Mentor of the Year in Nursing “Alla Kuzhel.

The chief physician of the Central Regional Hospital of the city of Popasnoy, Alexander Kovalchuk, also joined in the congratulations, who performed more than 380 operations under shelling. When active hostilities continued in eastern Ukraine, seven or eight wounded were simultaneously brought to the hospital, so the operating room was set up in the basement and operated almost around the clock.

The President also invited the mother of 19 children Svetlana Kovalevich from the village to participate in the New Year’s greetings. Glinny in the Rivne region, which “has been on maternity leave for all these 30 years.” The last baby was born in January 2019, when Svetlana was 45. But she and her husband do not exclude the birth of their 20th child. Alexandra Slyusarenko was also invited, who, after the death of both parents, is engaged in a family of 10 brothers and sisters.

In addition, Zelensky spoke about the outstanding achievements of Ukrainian pupils and students, “winning international Olympiads and competitions, whose drawings will decorate a unique spacecraft that will study Jupiter.” So, the festive event was attended by the winner of the Olympiads Alexander Panasenko from Zaporozhye, as well as eight-year-old Yarina Zakalyuzhna, who won the international competition of the European Space Agency Juice up your rocket. The girl’s drawing will be applied to the unique spacecraft Arian-5, which will explore Jupiter.

The 12-year-old Tatiana Tulaidan, who saved during the flood in the village, was also invited to participate. Yasinya of Ivano-Frankivsk region of four brothers and sisters and received the title of “Hero-Savior of 2021”, and honored donor from Dnipro Vladimir Nikolaev, who donated blood more than 600 times in almost 35 years and “whose indifference saved fifteen hundred people, and their veins his donor blood flows “.

The New Year’s greetings from the head of state were also attended by “those thanks to whom there is Ukrainian culture”, in particular, an opera singer, soloist of the National Opera of Ukraine, the Metropolitan Opera (USA), Milan’s La Scala, London’s Covent Garden, the Opera House Copenhagen (Denmark), the German State Opera Alexander Tsimbaliuk, ballerina, National Legend of Ukraine Elena Potapova, choreographer, National Legend of Ukraine Miroslav Vantukh, conductor of the National Academic Opera and Ballet Theater of Ukraine Herman Makarenko, who became the first Ukrainian laureate of the UNESCO Prize.

Zelensky especially noted those who “make inventions and discoveries, thanks to whom there is Ukrainian science.” Among those invited were: Ukrainian optical engineer, professor of Chernivtsi University, doctor of physical and mathematical sciences, laureate of the unique international prize named after Galileo Galilei Oleg Angelsky and head of the state enterprise KB “LUCH”, Hero of Ukraine Oleg Korostelev.

The President invited Tatiana Yalovchak, a native of Donbass, to participate in the New Year greetings, who conquered the seven highest peaks in the world.

The festive event was also attended by Yekaterina and Stefania Esipenko, the wife and daughter of the Radio Liberty journalist Vladislav Esipenko, who was arrested in the temporarily occupied Crimea.

“Ukraine has many more worthy sons and daughters who were invited to participate in the President’s New Year greetings, but due to certain circumstances they could not attend. However, their activities are important and noticeable for the Ukrainian state and society,” the OP stressed.

Earlier it became known that Volodymyr Zelenskyy congratulated Ukrainians on the New Year and named his main goals for 2022. The President noted that his main goal is to end the war in Donbass.

Blackberries: benefits for women and men, consumption per day

Ukrainian intelligence officer spoke about the amazing advantages of Bayraktar