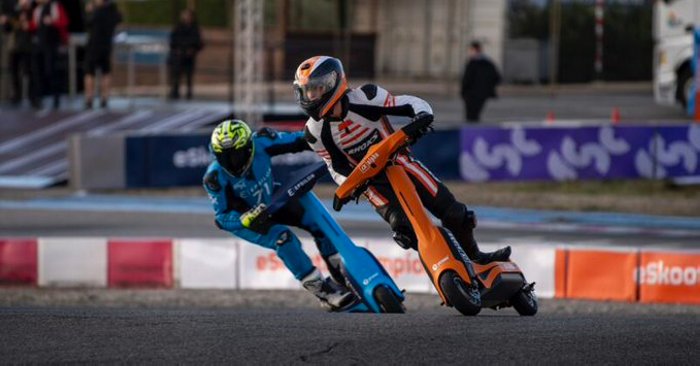 An electric scooter that can move at 100 km / h? Yes, there is one. And this is not some crazy invention of an enthusiastic teenager. The device is one of the first “birds” of a whole new era in vehicles – the era of high-speed, racing electric vehicles, which are yet to become more and more.

The scooter has inflatable tires, a 1.5 kilowatt-hour battery and a carbon fiber chassis. And, according to Shimeka, the machine offers an unexpectedly stable journey. “What’s really impressive is the confidence it gives you,” Shimeka added, recalling his own initial test trip.

No noise. No engine hum. There is no smell of exhaust fumes. There is a slight “squeak” of the electric motor and the soft whistling of the tires from their friction in the asphalt.

There will soon be races for electric scooters, and many other races for electric vehicles (EPS) demonstrate and support important advances in technology. For example, Formula E has been around for years. Recently, other types of races with the EPC have been swarming along it.

One example is the Extreme E racing series, which launched earlier this year. In it, electric sports cars compete in a series of off-road events. And in 2022, SuperCharge will organize ENP competitions on city streets around the world.

“We feel like we’re really inventing a new sport,” says Shimeka. His team had no real precedent to build on when he began designing the racing e-scooter. They weren’t even sure exactly how the drivers would handle the vehicle.

It turns out that this is a physically exhausting task. Drivers of high-speed electric scooters need to quickly adjust the position of their body from almost any angle. Each series in eSkootr Championship lasts only four or five minutes – partly because of the load on the rider’s body, partly because the relatively small battery built into the base of the scooter does not last long.

For any EPS racer, a low battery means the game is over. That’s why the battery system is something that the entire racing team needs to be constantly on the lookout for, says Roger Griffiths, team director at Andretti United Extreme E.

“All of us who came from conventional motorsport felt very good working with cars with internal combustion engines,” he explains. “But when we started driving electric race cars, everything turned out to be new.”

It takes three to four hours, he says, to prepare a racing electric car with a depleted battery – compared to just one hour for the hot Formula 1 car needed for cooling, charging and testing.

The safety considerations of the ENP are also completely different, given the high-voltage electronics involved in the control of electric racing cars.

There was a series of Extreme E races in Sardinia last month, and one of the cars driven by Stefan Sarazin was badly damaged in a collision with the fences. In such cases, engineers need to make sure there are no exposed electronics under voltage, Griffiths said. “You have to be careful with that until you know it’s safe,” he added.

In addition, electric cars are heavier than traditional racing vehicles – due to batteries. But with them, the weight distribution does not change during the race, unlike cars with liquid fuel, which is spent lap by lap. So electric cars are driven differently and this should be taken into account by pilots.

One of the goals of the Extreme E event is to show the capabilities and strength of electric cars. The track in Sardinia, Italy was a particularly difficult test – at first very dusty, and then more and more wet with the progress of the racing weekend.

In Extreme E, all drivers race using a specially designed electric SUV called the Odyssey 21. The cars get their energy from built-in generators that use either biofuel or hydrogen, Griffiths said. “We are here to demonstrate that these cars can be environmentally friendly.”

The Odyssey 21 also showcases technology that could eventually make its way to more modest consumer electric vehicles. A key example is silicon carbide semiconductors in Formula E and Extreme E cars. They allow for significantly more efficient energy transfer to the vehicle – potentially offering tens of kilometers of extra mileage with the same battery, Griffiths said.

“In road cars, this technology is prohibitively expensive, but it is being developed for racing,” he added.

“It has to happen, and it has to happen now, to secure a sustainable future,” said Shirley Gibson, coordinator of the retro-rally-cross and all-electric electro-rallycross championships in the UK. The last one started in 2021.

According to Gibson, short races of about five minutes in rallycross events – a mix of rally and circuit racing – are ideal for electric cars, as they don’t need a long charge to compete.

Some viewers complain that electric racing is not spectacular enough due to the lack of roaring engines. But Gibson and her colleagues believe that the visual spectacle remains exciting. And inspiring.

Horoscope for January 2, 2022: how all signs of the zodiac survive this dangerous day

“I was robbed”: the title fight of the Ukrainian against the Russian ended in scandal (video)