Astro Slide – this smartphone is for Linux fans

A professional device that is not inferior to some iPhone models 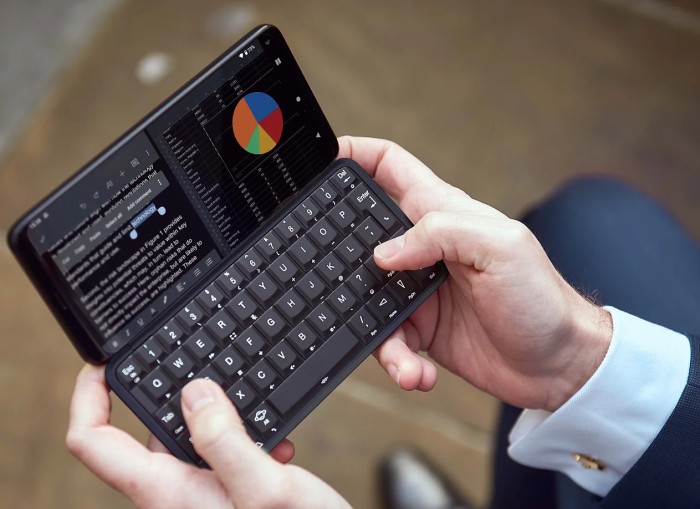 Linux сthe Astro Slide smartphone, which took nearly two years to develop, is preparing for the World’s Fair CES 2022, which begins on January 5 in Las Vegas. After the premiere, the creator of the device will proceed to mass production and sales.

Behind the Astro Slide project is the company Planet Computers. The main feature of this smartphone lies in its form factor, which was very modern in the dawn of Android smartphones. This is a horizontal slider with a full-fledged QWERTY keyboard below the screen.

In theory, Astro Slide can replace a full-size Linux laptop for basic tasks. The smartphone works with most modern Linux distributions, including Ubuntu, but fans can also install Android if they wish.

Price of Astro Slide after its release is not yet known, but currently the smartphone is available for pre-order at a price of $ 600. The exact date for the start of sales of Astro Slide has not been announced. Serial production, according to the developers’ plan, will begin immediately after CES 2022.

It’s all in the keyboard

The developers pay special attention to the Astro Slide keyboard. They have decided to sacrifice the overall thickness of the case and abandon the thin keys, making them bulky and thus increasing the convenience of typing. In addition, the keyboard is mechanical, not membrane. 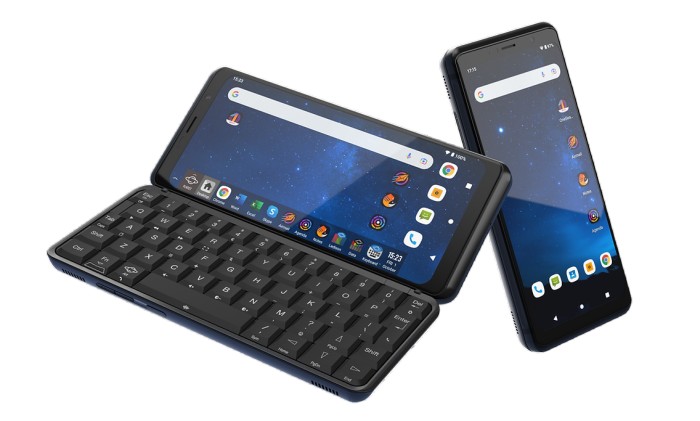 Astro Slide is designed to work in two modes – as a netbook and mobile phone
(photo: Planet Computers)

The smartphone has backlit buttons, and the firmware is supplemented with special software for setting function keys and additional functions. According to the developers’ plan, the Astro Slide will be released with different layouts and engraved buttons, depending on the markets in which it will be sold.

In most cases the layout will be QWERTY, but for Germany, for example, there is a QWERTZ version, etc. In total, layouts are planned for 24 languages. It is possible that the creators of the device will release a version in Cyrillic, in addition to the usual QWERTY. 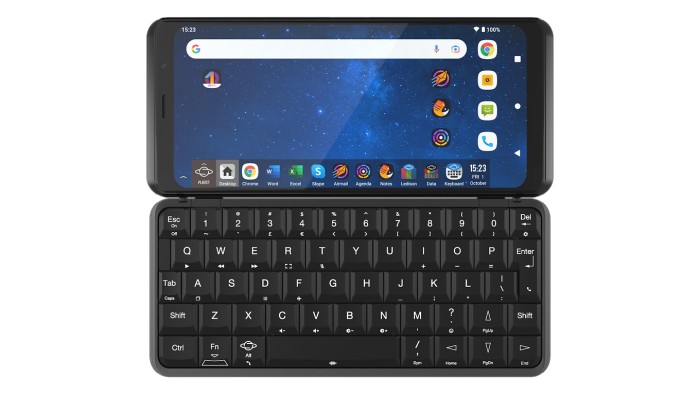 The smartphone will come with different layouts and engraved keys on the keyboard
(photo: Planet Computers)

The keyboard can be used in two modes – mobile and desktop. The position of the screen depends on the choice. In the first case, it will be in the same plane with the keyboard as with the other sliders. In desktop mode, the screen can be tilted slightly to turn the Astro Slide into a mini-laptop. 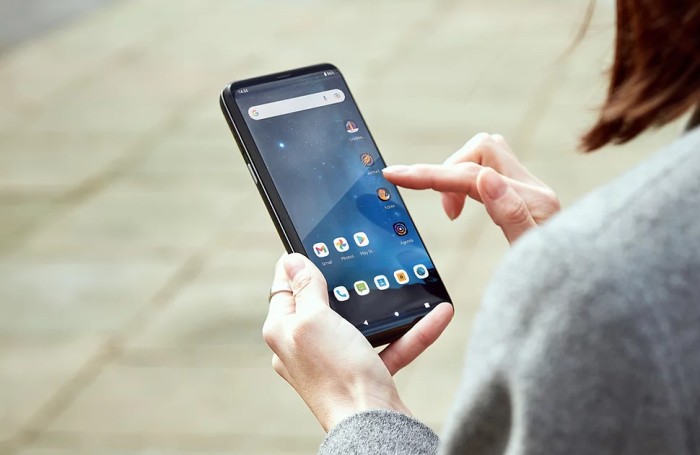 When closed, the Astro Slide is no different from other smartphones, except that it is thicker
(photo: Planet Computers)

Astro Slide is based on the Dimensity 900 processor announced by MediaTek at the end of 2019. The chip is manufactured by TSMC in a 7-nanometer process and is equipped with eight cores in two clusters. The first contains four Cortex-A76 at 2 GHz, and the second is occupied by a quartet of less efficient Cortex-A55 cores with the same clock speed.

The result of the chip in AnTuTu 9 is about 324 thousand points, in GeekBench 5 – respectively 510 and 1870 points in single-core and multi-core mode. The built-in accelerator Mali-G57 MC4 is responsible for graphics processing.

The developers have provided only two cameras, which is not enough for 2022. The front sensor makes 13-megapixel images, while the rear is 48-megapixel. 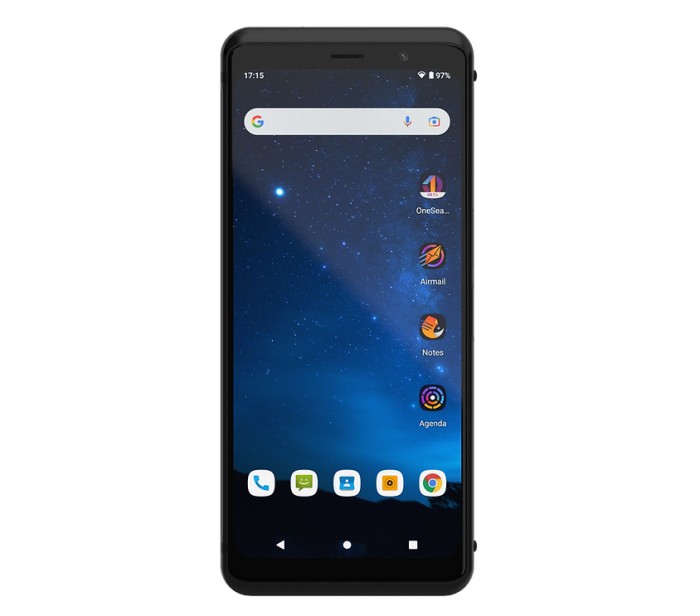 A 4000 mAh battery with USB-C charging and support for 10-watt wireless charging, as well as fast cable charging, is responsible for the operation of all components of the mobile phone.

The smartphone supports fifth generation (5G) networks, has a slot for microSD memory cards, wireless modules Wi-Fi 5, Bluetooth 5.1 and NFC, FM receiver, as well as GPS and Gonass receivers. There are two USB-C ports available, but the purpose of the second one remains a mystery. 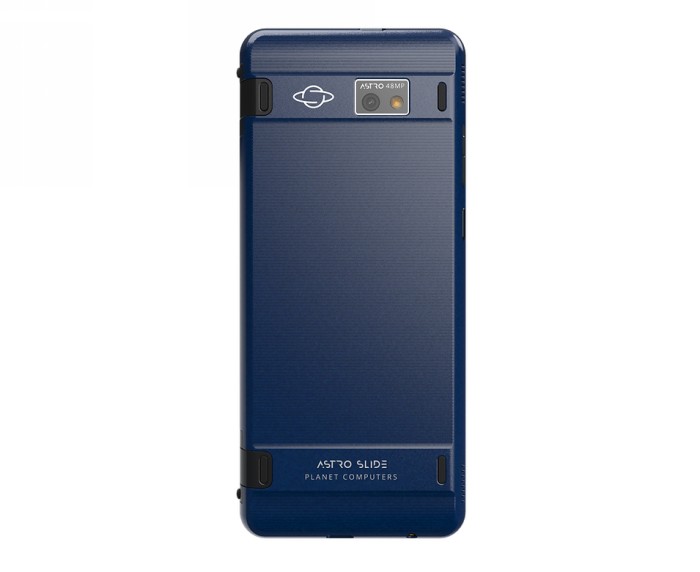 The main camera on the back of the Astro Slide has a 48-megapixel sensor
(photo: Planet Computers)

The form factor of Astro Slide does not allow it to be thin and light. Due to the presence of a mechanical physical keyboard, the smartphone weighs 300 grams and is 15 millimeters thick. Its other dimensions are standard – 164 mm high and 77 mm wide. A fingerprint scanner is placed on the side of the smartphone.

The premiere of Astro Slide was at the end of March 2020, but Planet Computers delayed its release for a number of reasons, the main one being the global coronavirus pandemic, recalls Liliputing. The smartphone was shown again at CES 2021 in January 2021, and the developers announced plans to release it in June 2021. 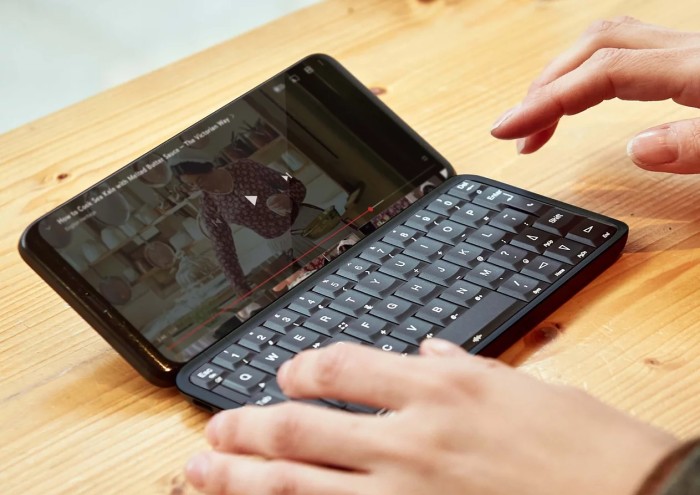 The global shortage of semiconductors caused by the pandemic that left Astro Slide out of business has contributed. There is still a shortage of chips. The developers may again postpone the launch of the mobile phone, citing Covid for the second time.

It should be added that the company has traditionally delayed the launch of its products. In the winter of 2017, the Gemini PDA communicator was announced, sales of which began more than a year later. In November 2018, Planet Computers unveiled another communicator, Cosmo Communicator, and it was also postponed by one year.

General warns of Putin’s readiness to use nuclear weapons

Vulnerability in Apple M1 cannot be closed by software