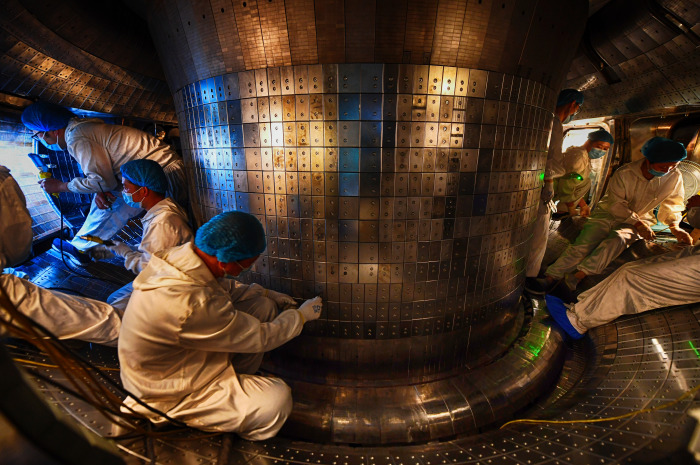 Eone of the three largest operating thermonuclear reactors in China has been able to hold plasma heated to 70 million ° C for more than 17 minutes. This is an important milestone in the development of technology thermonuclear energy production.

Long-term operation of the pilot facility allows engineers to troubleshoot process control systems, which will ultimately help develop a commercial version of the so-called artificial sun.

The Experimental Reactor, known as the Experimental Advanced Superconducting Tokamak (EAST, HT-7U Tokamak), is located in Hefei City, Anhui Province. Recent experiments by Chinese scientists have set a record in the process of plasma combustion. Earlier, in May last year, the reactor held plasma heated to 120 million ° C for 101 seconds.

But that was not all. EAST was able to hold plasma at 160 million ° C for 20 seconds. The new record is measured with a duration of 1056 seconds (17:36 minutes) of the process of combustion of plasma at a fairly high temperature of 70 million ° C, reported Hefei Institutes of Physical Science.

EAST was launched for the first time in 2006. The installation is based on a modified HT-7 reactor, which was put into operation under a Russian project in the early 1990s. EAST participates in the scientific program for the launch of the ITER International Experimental Reactor (ITER).

The record values ​​of the reached temperatures are most likely related to the heating of the electrons in the plasma beam, but the sources do not specify this point. In order to achieve a stable fusion reaction in plasma, it is necessary to heat ions to 100 million ° C, which are heavier than electrons and therefore approximately twice as cold at equal energy costs.

For example, the South Korean KSTAR reactor sets clear records for heating ions in plasma. His latest record was heating ions to 100 million ° C in 30 seconds. The Chinese side did not disclose these data. Probably the temperature of the electrons in the plasma.

Scientists have high hopes for the new HL-2M Tokamak, launched late last year. At the start, it performed very well, holding plasma heated to 150 million ° C for 10 seconds. HL-2M in Chengdu Province can heat electrons up to 200 million ° C and ions up to 100 million ° C. This year we will certainly hear about the records set by this tokamak.

Internet was completely disconnected in Kazakhstan