“Conflict on the brink”: Borrell in Donbass assessed the tension at the Ukrainian border (photo, video) 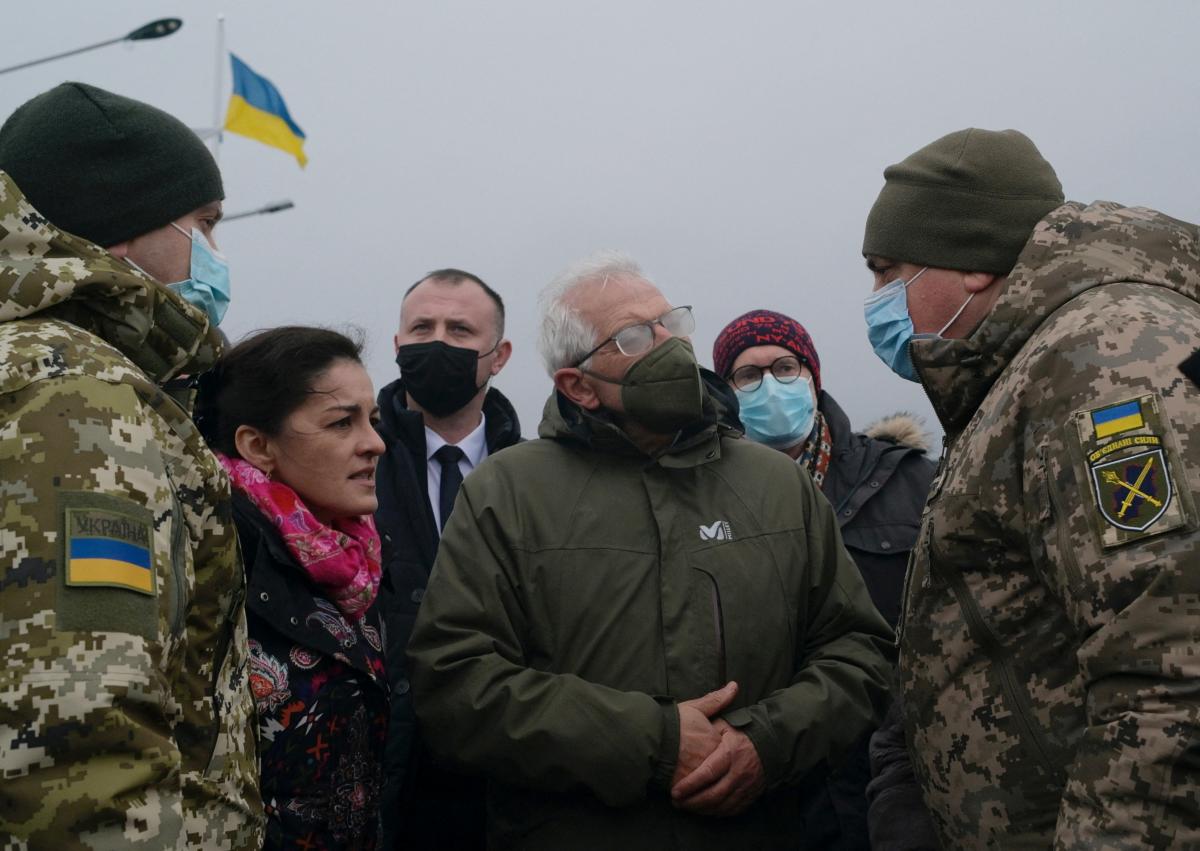 EU High Representative Josep Borrell stresses that the intensification of aggression against Ukraine will lead to enormous consequences for Russia.

Vice-President of the European Commission, EU High Representative for Foreign and Security Policy Josep Borrell notes that negotiations on security in Europe should be held with the participation of representatives of the EU and Ukraine.

As a UNIAN correspondent reports, the EU high representative said this at a joint press conferences with the Minister of Foreign Affairs of Ukraine Dmitry Kuleba in Stanytsia Luhanska.

“There is no security in Europe without the security of Ukraine. And it is clear that any discussions on European security should include the European Union and Ukraine. Ukraine should be involved in any discussions about Ukraine, first of all. And the conversation about security in Europe cannot take place not only without consultations, but also without the participation of the Europeans. It is for this reason that we are in close coordination with the United States, NATO and other like-minded countries, “Borrell stressed.

At the same time, the EU High Representative noted that the conflict on the borders of Ukraine in Russia is on the verge of deepeningand tensions are mounting with regard to European security in general.

“Russia is building up troops in a very unusual way, accumulating weapons along the Ukrainian border. And this process happened very quickly,” Borrell said.

At the same time, he said that last summer, when US President Joe Biden made his first visit to Europe, China was the main cause for concern.

He recalled that Russia not only pulled troops to the Ukrainian border, but also initiated two draft proposals on security in Europe.

“But we no longer live in the times of Yalta. Delimitation into spheres of influence between two large countries is no longer a question of 2021 or 2022. The issues of security in Europe and security in Ukraine, since Ukraine is a part of Europe, this is the question that is in first of all, it concerns Ukrainians and Europeans, “Borrell stressed.

The High Representative stressed that he came to Ukraine to reaffirm the full support of the European Union for the independence, sovereignty and territorial integrity of Ukraine.

He added that the EU and Ukraine are cooperating to de-escalate the conflict with Russia.

“Our main goal is to try to reduce tensions through current and future negotiations, as well as through a tough and decisive position of support for Ukraine,” Borrell said.

“We will try to reduce tensions through dialogue, avoid an increase in tensions, consider ways of settlement, but with a resolute position and a tough attitude that any military aggression against Ukraine will have enormous consequences and a serious cost,” Borrell said and noted that the issue of preparing sanctions coordinated with the United States, NATO and other like-minded countries.

“Mr. Borrell heard a detailed briefing from the Joint Forces on the systemic violations of the Minsk agreements by the Russian Federation. And now Ukraine and the European Union have one task – to help diplomatically de-escalate the situation and the fact that Moscow would reduce tension and abandon its aggressive intentions. We are systematically working to contain the Russian Federation, and, of course, one of the elements of this containment package is the preparation of new painful sanctions against Russia, “Kuleba said.

“The main topic of today’s visit is security. I am glad that Mr. Borrell was able to see and feel with his own eyes the devastating consequences of the conflict, as well as Ukraine’s efforts to end this war and to make life easier for citizens on both sides of the contact line,” Kuleba said.

The minister also said that the European Union stands side by side with Ukraine in countering Russia’s aggressive policy.

“We are talking not only about political support, but also about very practical solutions. For example, recently the European Union joined Ukraine to the European Peace Fund, within which 31 million euros will go to strengthen the capabilities of the Armed Forces of Ukraine,” said Kuleba.

According to him, this support is aimed at supporting Ukraine and its ability to defend itself, since Ukraine is devoted to diplomacy and the implementation of the Minsk agreements, and a political settlement of the conflict.

As UNIAN reported earlier, on October 31, 2021, the American edition of The Washington Post published an article that spoke about an increase in the number of Russian troops and equipment near the borders of Ukraine. It was noted that these maneuvers caused serious concern in the US and European government circles.

On December 17, the Russian Foreign Ministry published a draft treaty between the Russian Federation and the United States on “security guarantees” and a draft agreement on measures to ensure the security of Russia and the NATO member states. In particular, Russia proposes NATO to refuse to accept Ukraine into the Alliance, as well as “from any military activity on the territory of Ukraine.” The Russian Federation also offers the United States not to create military bases on the territory of the countries of the former USSR and not to accept these countries into NATO.

On December 16, 2021, President of the European Commission Ursula von der Leyen said that the European Union had prepared “serious sanctions” in the event of a new Russian aggression against Ukraine.

In this regard, on January 10, US and Russian diplomats will hold security talks in Geneva to discuss the military activities of both countries and the growth of tensions around Ukraine.

Reaction to the invasion of Ukraine: Latvia approved a ban on gas supplies from Russia