The Hubble telescope took a photo of the “collision” of two galaxies, but this is just an accident 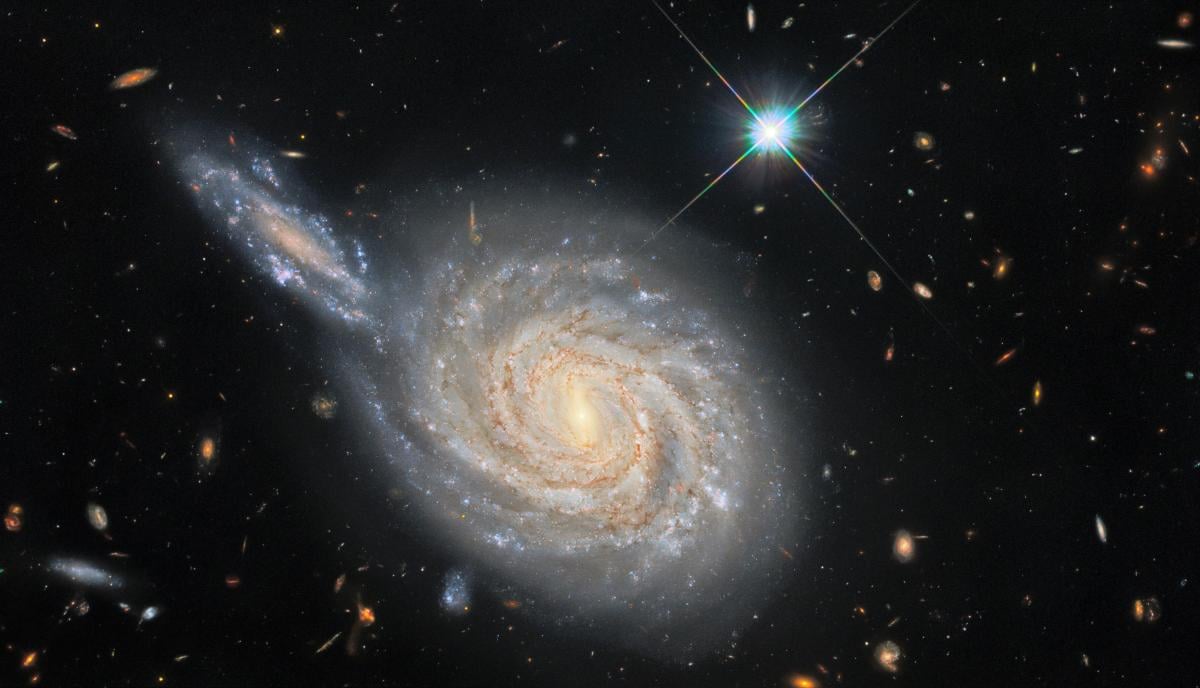 The galaxy NGC 105 was observed because it contains two objects that are important to astronomers.

The Hubble Space Telescope took a photo of spiral galaxy NGC 105, which gives the impression that it is about to collide with a neighboring galaxy.

As reported on observatory websiteNGC 105 is located in the constellation Pisces at a distance of 215 million light years from us (1 light year is approximately 9.5 trillion kilometers – UNIAN).

And although the image shows that this galaxy almost collided with another, in fact, the neighbor is at a great distance and still remains relatively unknown to astronomers.

“Such misleading combinations often occur in astronomy. For example, when the stars in the constellations are at very different distances from the Earth, but it seems that they form patterns – only due to the random alignment of the stars of which they are made,” – explained the astronomers.

The picture was taken with a Wide Field Camera 3 (WFC3).

Observations of the galaxy were carried out because it contains Cepheids (pulsating variable stars that have already passed the main sequence stage and are heading for the red supergiant stage – UNIAN), as well as supernovae (stars that suddenly increase the amount of emitted energy billions of times, and are the result of cataclysmic process that occurs at the end of the evolution of some stars – UNIAN).

These seemingly unrelated objects are used by scientists to determine distances used in astronomy. By measuring their apparent brightness and knowing the luminosity, they can determine the approximate distance.

“Both Cepheids and supernovae have very predictable luminosities, which means astronomers can determine exactly how bright they are. By measuring how bright they look when viewed from Earth, these ‘standard candles’ can provide reliable distance measurements. NGC 105 contains both supernovae and variable Cepheids, which gives astronomers a valuable opportunity to calibrate the two methods of measuring the distance, one relative to the other, “- explained the scientists.

Read alsoHubble telescope made a grand tour of the solar system (photo, video)

Galaxy NGC 105 was discovered by French astronomer Edouard Jean-Marie Stephane, who first observed the object on October 15, 1884. This object is contained in the original edition of the New General Catalog (the most famous catalog of non-stellar deep space objects in amateur astronomy – UNIAN).

Hubble telescope: what is known

The Hubble telescope was launched into orbit on April 24, 1990 by the crew of the reusable spacecraft Discovery and has since transmitted millions of unique images to Earth, significantly expanding the understanding of scientists about the structure and origin of the universe.

For more than a quarter of a century, the device carried out 1.2 million targeted observations of 38 thousand space objects, on the basis of which about 13 thousand scientific papers were prepared. According to experts, “this makes it one of the most effective scientific tools in history.”

Hubble has been in orbit for 31 years and is increasingly failing. Therefore, it should be replaced by the James Webb Telescope (JWST), which was launched into space on December 25, 2021. The construction of the telescope began 25 years ago and spent $ 10 billion on it.

The telescope will make a 30-day journey of 1.6 million kilometers from our planet in the direction of Mars – to the second point of Lagrange. James Webb will start operating almost 6 months after its launch. During this time, the device will cool down to operating temperatures, calibrate its mirrors and instruments.

Read also“James Webb”: the main thing about NASA’s most powerful telescope for $ 10 billion

JWST is a very large mirror 6.5 meters in diameter. For comparison, the Hubble is only 2.4 meters. Since a “saucer” of this size could not fit into a rocket, the Webb mirror was made complex. It consists of three sections that must unfold at the point of arrival. The mirror is literally golden. Engineers coated 18 hexagonal segments with a layer of 100 nanometers thick gold – this metal reflects infrared rays well.

The roar was like during an earthquake: a meteor burned out in the sky over New Zealand (video)

For the first time since the beginning of the war, a ship arrived in Ukraine for loading